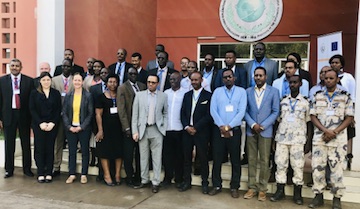 12 December 2019, Djibouti: The IGAD Security Sector Program (IGAD SSP) has successfully concluded a three-days regional training for Port (air, water, and land) Authorities in ‘Detecting, Identifying and Intercepting suspected terrorists and Foreign Terrorist Fighters on border crossing points’ with the objective to enhance institutional capacities of the IGAD Member States. The training was intended particularly to enhance the capabilities of port authorities in the IGAD region in effective mechanisms using biometric data and other traveler identification systems on how to detect, identify and intercept suspected terrorists and FTFs when such individuals attempt to enter into/exit from, or transit through borders of IGAD Member States.

The training was conducted by senior officials and experts represented by, and in collaboration with, the United Nations Center for Counter Terrorism (UNCCT), the INTERPOL - East Africa Regional Bureau, and Austability.

In this training, all member states were represented with the total of 30 delegates (of which four were women) - officials and frontline officers from immigration, port authorities, border security law enforcement/border police, and national intelligence.

One of the objectives of the IGAD Security Sector Program is enhancing institutional and human capacities of Member States and IGAD to effectively address emerging, evolving, and existing  transnational security threats (EEE-TSTs) in order to contribute to regional peace and stability, and foster enabling environment for regional integration and development of the sub-region, under which this training was conducted.

The training was conducted with the financial support from the European Union Trust Fund (EUTF) through the Austrian Development Agency (ADA) under the IPPSHAR Programme.